It started with a gust of hot wind – I remember the feeling of the wind on my skin, felt it tearing at my face, and I remember how it felt like the heat of an oven.  The landscape was grey and smoky and blasted with deep craters, and I could feel the grit and rocks underneath my bare feet.  I swear, even though I know it’s not possible in a dream, I could feel sharp bits of stone pressing painfully into the soles of my feet – they actually hurt.  You can’t feel pain in a dream, right?

I stood there, in this insane dreamscape, and I felt so much fear it was like I couldn’t breathe – even though in dreams I don’t think you really need to breathe.  I expected the doorway – I felt that I was going to be face to face with it, or dragged into it somehow – I felt that same level of dread and foreboding.  I heard something, too; some kind of rhythmic sound like humming or chanting that came and went on the hot wind.  I think I heard something behind me, and so I turned.

The soldier was there, sitting this time, which was new.  I could see him from his left side, and that rhythmic chanting seemed to get louder, the wind felt stronger on my face.  He turned to me then – not just his head, but somehow his whole body – and what I saw…  I’m still not sure what I saw, so how do I describe the indescribable?  I remember him looking at me, and at first his right half seemed to be melted, but then it was like his arm was elongated into some sort of hellish tentacle.  It writhed and squirmed and there was a sick, wet, repulsive sound as it moved.  I feel like he tried to communicate this time, but I was too terrified by the whole scene and it must have jarred me awake. 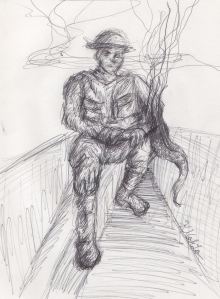 I woke in a cold sweat, shaking, huge fragments of the dream still playing in my mind, that mad tentacle still squirming behind my eyelids.  I did my best to sketch it, I don’t know why – the last thing I want to do is re-live it, but it seems important in some way.  It’s the middle of the night and I can’t go back to sleep, don’t want to go back to sleep, don’t even want to turn off the lights.

Just a normal guy with a lot of very abnormal stuff going on.
View all posts by Chad →