I was paid a surprise visit from one of my relatives today – it seems this blog has been making the rounds with certain family members as well as strangers.   I promised I would not reveal exactly who visited, since the information they revealed is of the serious ‘skeletons in the closet’ type and I would not want to cause any family issues.  Some may be able to guess who, but I can say that if you are thinking the ‘obvious choice’ you are wrong – it was not him.

This person revealed not only an old, dark family secret, but they also had photographic evidence; a picture, battered with age, that is simply incredible and, based on its apparent age and the context with which I received it, completely authentic. 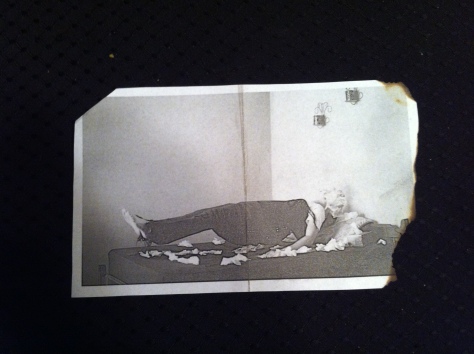 The story started in the late 1940s and I’m assuming it has to do with my Great-Grandfather and my Grandpa Joseph and the legacy of Yog-Sothoth.  My great-aunt Vivian went missing for a week – she disappeared right out of her bedroom on midsummer’s night, as the story goes.  The police were called, they searched half the town – it was a pretty big deal, from what I was told.  The funny thing is that I hadn’t even heard that story yet – I guess the family felt it wasn’t ‘appropriate conversation’ and nobody from my father’s or grandfather’s generation ever spoke of it.  But apparently it was after her disappearance when things got really weird – things happened that few people know the truth of.

One morning, a week after she disappeared, Aunt Vivian woke up in her bed as if nothing had happened.  She said she wasn’t aware that she had left her house, or that any more than a single night had elapsed since she went to sleep.  She recounted a vivid, bizarre dream where she was pulled through a corner of her room and visited strange worlds.  She said she remembered strange, unearthly sounds, and saw colors that weren’t part of any spectrum she recognized.  She recalled strange figures that she couldn’t properly describe, as well – nothing that resembled human, though, from what my relative remembered of the story.

After that, Aunt Vivian wasn’t ‘quite right’ as they say in polite circles.  She remembered her vivid ‘dreams’ and would speak of them – sometimes she would say strange things out of the blue, tell complete strangers details about strange creatures, or speak in unknowable languages.  She was institutionalized for a while – that seems to run in the family – and at some point someone in the family believed that she was ‘demonically possessed’. That brings us to the above photograph.

Some time in 1953, Aunt Vivian had a particularly bad episode and a priest was brought in for a blessing – not even a full exorcism, according to my relative, just a ‘simple blessing’.   Vivian reacted with hysterical laughter at first, and then started telling the priest that his god was ‘a mere fairy tale’ and that if he ever looked into the face of the TRUE gods of the cosmos, he would weep in glorious horror.

Vivian was laid on the bed and the family and priest all held hands and started praying over her and she started a hideous, discordant humming.  As they prayed louder, she hummed louder, and it kept going for a while – my relative wasn’t sure how long. It was then, according to my relative, that Vivian floated – levitated – about a foot over the bed, humming that sickening sound.  The family members present and the priest kind of freaked out, to say the least.  My relative wasn’t sure who took this photo, and I promised not to say how my relative got their hands on it – it was supposedly destroyed.

After that incident, apparently Aunt Vivian never spoke of strange worlds or ancient, terrible gods again.  Whether she forgot or she just knew better than to talk about it I have no idea, but she finally passed away in the late 1960s after an otherwise normal and unremarkable life.  Nobody ever spoke of her ‘episodes’ – it was relegated to deep, dark family history.

A history I am now a part of.

Just a normal guy with a lot of very abnormal stuff going on.
View all posts by Chad →